Previous Next
“Biochemestry” of the ISM 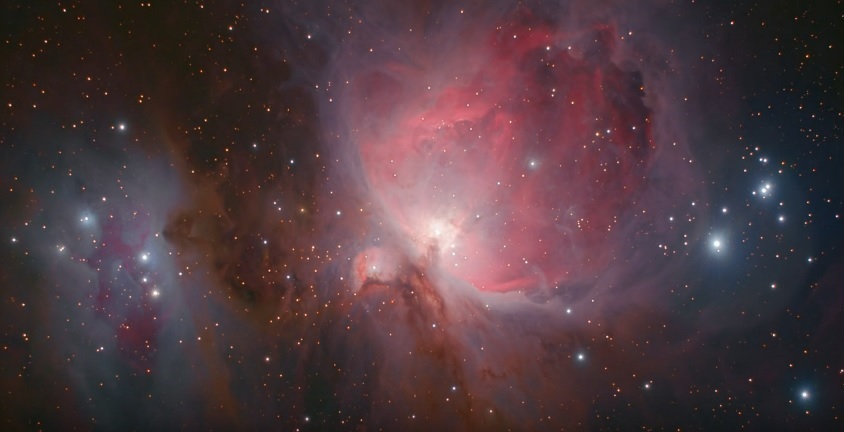 Photograph of the Orion Nebula, a Molecular Cloud.

Among the elements that we can find forming the matter of the Interstellar Medium, Hydrogen (H) and Helium (He) are respectively about 70% and 28% of the mass of the whole ISM; the remaining 2% of the mass is constituted by elements heavier than helium. These elements heavier than helium are often found in the form of finely powdered particles dispersed between hydrogen and helium, and these partticles sometimes constitute true clouds that can be seen with telescopes.

The starting of the study of the composition of the ISM became possible after the development of a detection and analysis technique called Absorption Spectroscopy. In 1904, the German astronomer Johannes Franz Hartmann used this technique to study and analyze the light coming from the star Mintaka (one of the three constituent stars of the Orion Belt). The wavelengths of electromagnetic radiation coming from any star depend on the chemical composition of such star, and they change over time due to the movement of the star in relation to the terrestrial observer. Among the taken records Hartmann could see some calcium detections with wavelengths that had not suffered the variation corresponding to the movement of the star Mintaka. Hence, the detected calcium could not be located in the star’s atmosphere, and should be instead between the star and the telescope. Since no terrestrial source of calcium was detected, such calcium had necessarily to be in interstellar space. This scientific milestone is the first palpable detection of matter between the stars, and thus of the Interstellar Medium. 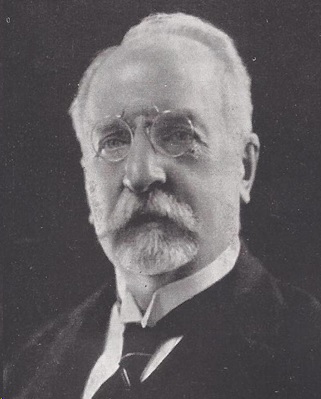 Main stars of the Orion Constellation, where star Mintaka is located.

This detection of calcium atoms in 1904 was followed by the detection of sodium and other chemical elements, as also organic and inorganic molecules, always using the same technique of Absorption Spectroscopy. It was in 1937 when the first molecule was found. It happende to be an organic molecule: the methilidyne radical, which is the simplest of carbynes. Its formula is CH3··, where the superscript “3 ·” denotes three non-bonded electrons of the atom of carbon.

Between 1937 and 1969 some other molecules were found, but it was since the 1970s when new molecules began to be detected almost continuously. It is quite relevant the discovery, in 1969, of water (H2O) and formaldehyde (H2CO). In 1971, Zuckerman, Ball and Gottlieb reported the first detection of methanoic acid (HCOOH), also called formic acid, a compound that is very well known here on Earth, as ants produce it as a toxic substance to protect themselves against predators and enemies.

Formic acid is a molecule that can exist in two distinct forms: two conformational isomers called trans and cis. The trans isomer is much more stable, and the conversion of trans to cis requires an amount of energy that, theoretically, is not available in the interstellar medium. The isomer detected so far had always been the trans one; but recently, in November 2016, a group of scientists from the Spanish CSIC reported the detection in the ISM of the cis isomer. The authors of the article argue that the conversion of trans to cis is possible due to the action of ultraviolet rays present in considerable quantity in certain regions of the ISM. 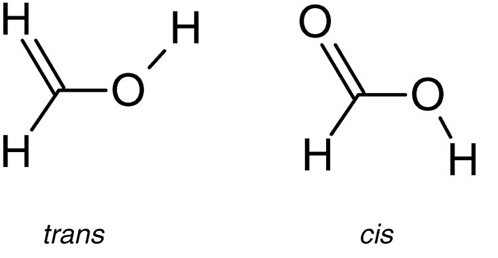 The two conformers of formic acid: trans and cis.

Since the 1970s, many other organic molecules have been detected, including acetylene (C2H2), methane (CH4), acetic acid, acetone and benzene.

Among all these findings, there are two that could be of special relevance for the study of the origin and the presence of life in the Universe. The first of these two findings occurred in 2004, when Vijh, Witt and Gordon reported the possible detection of pyrene and anthracene in the ISM. Pyrene and anthracene belong to a family of molecules called “Polycyclic Aromatic Hydrocarbons” (PAHs), which are a simple union of benzene rings. The data provided by Vijh, Witt and Gordon were not completely definitive and fail to confirm with complete certainty the presence of PAHs in the ISM. But two years later, in 2006, an article published by Mulas, Malloci, Joblin and Toublanc confirmed the presence of PAHs in the ISM. The second relevant finding happened in 2010, and it was the first detection in the ISM of a type of molecule called fullerene. Two fullerenes with the formulas C60 and C70 were detected. Such detection was reported by Cami, Bernard-Salas, Peeters and Malek. Fullerenes, as can be deduced from their own chemical formulas, are molecules formed by pure carbon. In the C60 fullerene, also called “buckminsterfullerene”,  carbon atoms are arranged three-dimensionally in the form of a soccer ball. 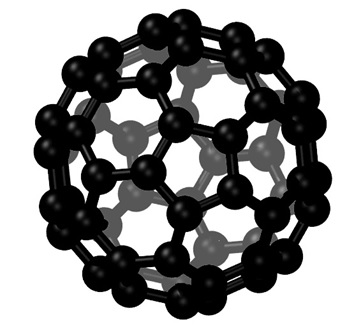 Appearance of the three-dimensional structure of the buckminsterfullerene molecule (C60).

The relevance of the detection of fullerenes and PAHs in the ISM is that these two types of molecules could be the basis for the development of biochemical evolution. Such molecules would be the starting point from which nucleic acids and proteins would emerge. Currently, the so-called “Hypothesis of the World of HAP“, which was proposed by Simon Nicholas Platts in 2005, postulates that PAHs and fullerenes, which are assumed to have existed also in abundance in the primordial soup of the early Earth, played a very important role in the origin of life, because they mediated the synthesis of the first RNA molecules, which led to the so-called “RNA World“, where there was only RNA that replicated itself, a world that would later be replaced by the “RNA, DNA, Proteins World” of nowadays.

If PAHs and fullerenes are present in the ISM and throughout the Universe, the genesis of life is potentially possible anywhere.