Previous Next
JWST TO BE LAUNCHED IN 2019

… in case there is no any other unexpected delay.

The JWST (James Webb Space Telescope) is a space telescope, that is, an artificial satellite destined to observe the cosmos and the celestial objects in a similar way as a ground telescope does it.

Since “Cosmos 215” was launched on April 18, 1968, an important number of space telescopes have been sent to the outer space, but among all of them we have to highlight the so-called “Great Observatories”, which are the four larger and more advanced space telescopes launched ever, each one of them focusing on a particular region of the electromagnetic spectrum:

JWST will replace Hubble, and partly also Spitzer, since it will observe in infrared as well as in visible.

Plans for developing a successor to Hubble began in 1993 or perhaps even earlier, but it was not until 1996 that the JWST project was created under the name NGST (Next Generation Space Telescope). It was in 2002 when the former denomination was changed to the current JWST.

After that year of 2002, there were a number of changes in the original planning of the project and also successive increases in the total budget initially estimated.

In 2011 JSWT reached its latest design and manufacturing phase, and for that year it was expected to be launched in 2018. Finally, in 2017, the forecast was delayed by one year, until 2019.

The assembly of the 18 hexagonal pieces of the main mirror, one of the final construction steps, was completed in 2015, and the manufacture of the JSWT was finally over in November 2016. Since then, the test phase started and it is still on process. 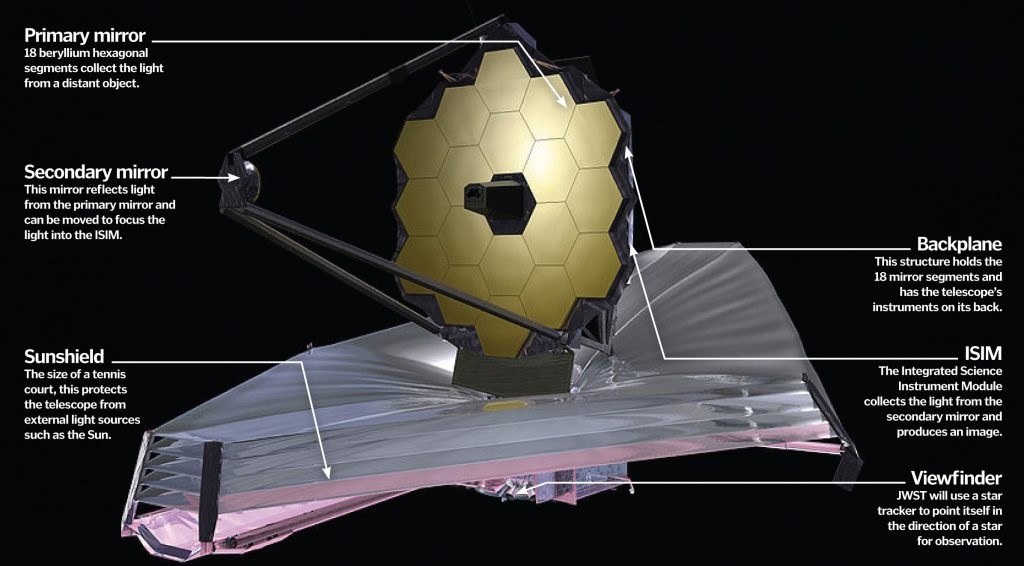 Structure of JWST with its main components.

JWST is a project of NASA, but ESA and CSA are also collaborating in it.

1) The search for light coming from the galaxies and stars that formed in the universe just after the Big Bang.

2) The study of the formation and evolution of galaxies.

3) Achieve a deeper understanding of the formation processes of stars and planetary systems.

4) Study planetary systems and the origins of life.

In order to achieve these objectives, JWST will have a great capacity of observation in the infrared region of the electromagnetic spectrum.

JWST can be very useful in trying to clarify the origin of Tabby’s Star (KIC 8462852) light-curve strange fluctuations.

The main mirror of the telescope is a beryllium reflector laminated with gold. It is 6.5 meters in diameter, and is composed of 18 hexagonal pieces.

The telescope will carry the following instruments, assembled together in the so-called Integrated Science Instrument Module (ISIM):

Launching of JWST is currently planned for the spring of 2019 using an Ariane 5 rocket. A 5-year mission has been planned, although it is estimated that the telescope could remain in space for another more 5 years, finally reaching a total of 10 years in active.

The second Lagrange point (L2) is located on the Sun-Earth line, at a distance of about 1,500,000 km from the Earth in the direction opposite to the Sun. According to Kepler’s laws, an object located on L2 should orbit around the Sun, as Earth does, but at a slower speed than Earth, so that it would take more than a year for such object to complete its orbit. However, when located exactly on L2, the effect of Earth’s gravity on the object makes the period of the object’s orbit to be equal to that of Earth. 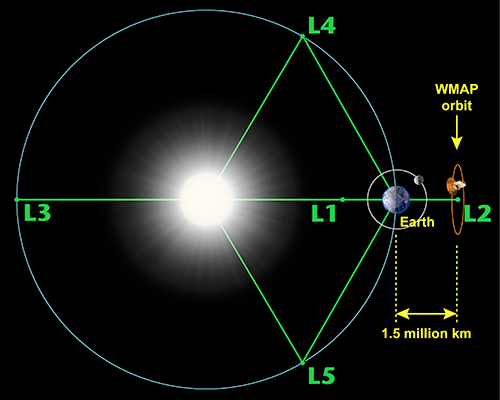 Once in orbit, JWST will communicate with Earth using several large antennas that will be located in Australia, Spain and California (USA).