Mars has now two craters called Schiaparelli. The European lander Schiaparelli (EDM) of the ExoMars program crashed against Mars surface on the last October 19th of 2016. What should have been the first lander of the ESA landing smoothly on Mars, finally crashed at high speed against the plains of Meridiani Planum. As soon as Schiaparelli disappeared, both the ESA and NASA started to work together in order to find the rests of the crash, and the confirmation of such event was soon provided by the NASA’s MRO (Mars Reconnaissance Orbiter).

It was launched together with the ExoMars Trace Gas Orbiter (TGO) on 14 March 2016 and attempted a landing on 19 October 2016.Telemetry signals from Schiaparelli, monitored in real time by the Giant Metrewave Radio Telescope in India, were lost about one minute from the surface during the final landing stages. 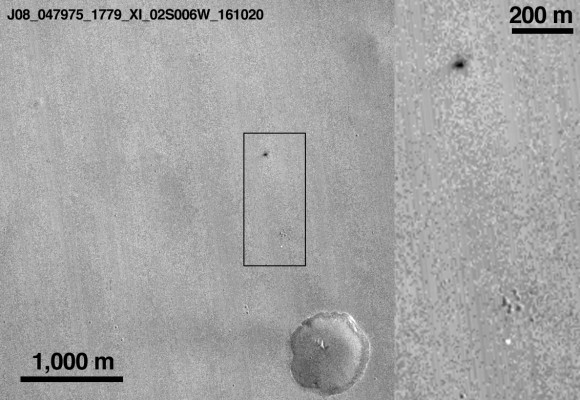 Schiaparelli’s crash (black spot) and its parachute (white spot) in this image taken by the CTX camera of the MRO (NASA/JPL-Caltech/MSSS).

As the landing elliptical trajectory is quite large (100 x 15 km), MRO started the search in the central part of the ellipse –the place with the highest probability— and found Schiaparelli soon, just 5.4 km away from the center of the ellipse, and 53 km away from the place where NASA’s rover Opportunity is located now. This means that at least Schiaparelli’s landing trajectory was right. In order to make the search works easier, MRO has used its CTX (Context Camera), which resolution is much lower than HiRISE camera, the best camera in MRO (CTX has a resolution of 6 meters per pixel vs the 30 cm per pixel of HiRISE). 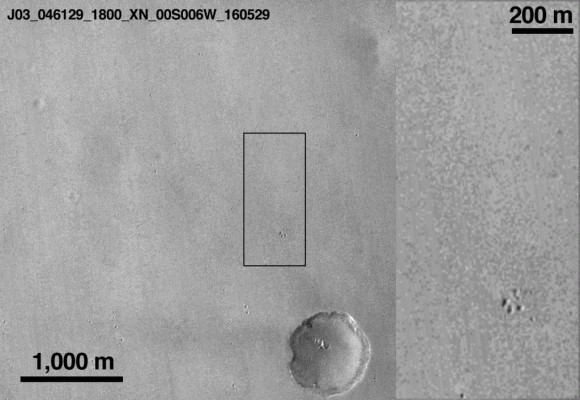 Image of the Surface before the crashing of Schiaparelli. (NASA/JPL-Caltech/MSSS). 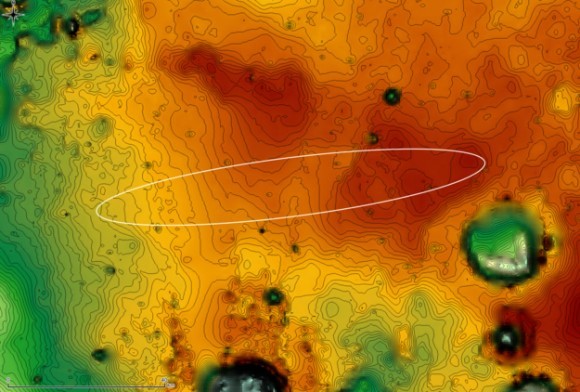 Area of landing of Schiaparelli in Meridiani Planum (ESA)

The images taken by CTX show a recent impact in Meridiani Planum that has caused an elliptical crater of 15 x 40 meters, and quite close to this crater there is a clear spot that must be the 12 meter’s diameter lander’s parachute. Schiaparelli’s communication system was able to send to ExoMars TGO some signals that show that due to unknown causes the lander got separated from the parachute before it was expected and the hydrazine propulsors worked only for three seconds instead of the planned thirty seconds. As a result, Schiaparelli fell down from a height of two kilometers and crashed against the surface of the planet. 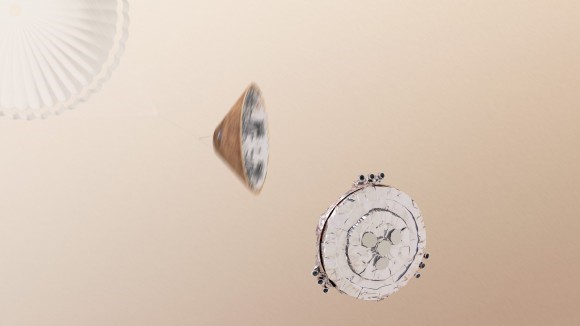 Area of landing of Schiaparelli in Meridiani Planum (ESA)

We don’t have yet the images of HiRISE, the higher resolution camera. Once we have got them, we will be able to use these photos together with the signals sent by Schiaparelli when descending, and use these data to try to solve the mystery of what happened. In the past, Mars landers used to “call home” only once they had arrived at the surface. The failures of NASA’s Mars Polar Lander and the British Beagle 2 have shown that having signals sent during the descending process is quite important to discover the causes of possible accidents and take the necessary measures to avoid them to happen again in the future.

About the Author: Admin